"Jukebox": extensive music program at the touch of a button

Reading time: 5 minutes
Jukebox tells us in this interview about a saved Music Festival and why they have a whole 3 days of program...
Jukebox is a very versatile performing formation. You can be booked as a duo, trio, quartet or even extended line-ups. Can you tell us something about this concept?
Booking a band is always a question of price. Since we mainly play weddings from April to October, there is a need to be able to serve both large weddings with more than 200 guests and small parties with 60 guests. Our musicians are all musically trained professionals and not only perform with us but also help out with other, friendly bands when needed. The core of the band consists of 4 musicians including me. If necessary, 6 additional musicians can be added, depending on the wishes of the organizer.
Can you tell us something about the musical career of Jukebox or about you personally?
The band was founded in 2011 by me with the 3 musicians who form the core today. Before that we all played in a 7 man band "Satellite". Thanks to portals like yours, the booking work is made much easier for me. With it we do 100 gigs a year and more. I myself have been making music since I was 4 years old, was a church musician (organ and trombone) for many years and have been playing in various bands since I was 17. I enjoyed my musical education at the Bruckner Conservatory in Linz.
These are well-known addresses! At a hotel gig, we were able to personally convince ourselves that you were able to fulfill even the most unusual song requests of the audience on demand. How big is your song list?
Currently we have 569 songs from all genres in the program and another 250 that we have put in an "if desired" section for the sake of timeliness.
Is there anything you and your colleagues are particularly looking forward to in 2016/2017?
Recently, like last year, we played 3 days at the wine festival in Landau an der Isar. At the wine festival, which has been organized for 29 years by vintners from our sponsor town Landau in the Palatinate, we are allowed to play whatever we want.

It's fun for us because we get through almost our entire program in the three days.

Next year is our 30th anniversary and we are looking forward to it.
With such an extensive program, I can understand that! Is there a performance, an anecdote you would like to tell us?
Last year we were booked for a wedding in Putbus on Rügen. The couple gave us 4 days of vacation in addition to the fee. During a day trip to Binz, several stages were set up along the beach promenade. 23 years Music Festival was to be read on the posters, beginning 20:00 o'clock. So it was. Bands started to play on all stages. Only on the one in front of which we were sitting, the backline was set up, but on top there was visibly nervous phoning and rather helpless only one man. As it should turn out, he was the guitarist of the band. His colleagues had a car accident on their way from Hamburg, were only slightly injured, but couldn't come anymore. In the meantime, the organizer came along, just as perplexed as the poor colleague. We approached them and said that we are a pretty good band from Bavaria, had our instruments in the band bus parked not far away because of the booking at the wedding, and so we were happy to help out. Somewhat skeptically, both agreed of necessity. Already during the first song, "Fire" by the Pointer Sisters, the skepticism gave way to a broad grin and that remained so for the next 5 hours. When we said at the end of the spontaneous event that we do not want money and the fee can be shared with the injured colleagues, he did not understand the world (or better the Bavarians) more.

A beautiful memory! We are glad to have you in our community and wish you continued success and fantastic performances! 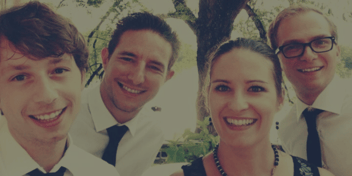 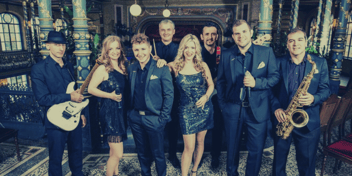